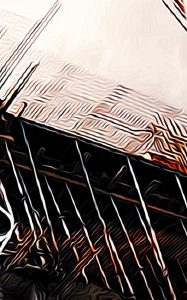 Noah tended to surround himself with intelligent people. That was how you got things done, after all – brawn could only get someone so far. Yet two months ago, Noah’s group had been given a problem they couldn’t solve.

Noah and his stand-in-leader Lucas had spent hours theorising how to keep their rivals out of Cheltenham without resorting to violence. At first, Noah had suggested a parley, which felt strangely prim. The idea might have been in line with street law, but polite conferences weren’t the preferred course of action when blows truly came to pass.

Noah had a few other less-than-savoury ideas, but they couldn’t talk freely outside the hardware store. Bayside was one of the few remaining parts of the city that hadn’t been divided and claimed in the relentless battles between Melbourne’s rival groups. It was neutral territory, and while it was safe, it was also stifling for someone like Noah, who thrived on secrecy.

“Perhaps we should go physical,” Lucas had said.

Lucas shook his head, blond hair glinting in the sunlight. “Not that kind of physical.” With a huff, he removed a ballpoint pen from his pocket and began scribbling on the scrap paper before them. “Think of all the great architecture throughout history, all the easy things that tradesmen could build and maintain to keep their citizens safe.”

And so the plan came to fruition. At twilight, the group congregated outside the best building supplies store Cheltenham had to offer, their pockets lined with coins and their faces lined with grim determination. When the shop assistant returned from her lunch break, they would trickle slowly into the store, like water spilling through a sieve. Too many at once, and it would arouse suspicion. Too few, and they wouldn’t complete their construction project by the end of the night. It had to be a one-time thing. When their rivals awoke tomorrow morning to find a thirty-foot, reinforced timber fence staring them solidly in the face, they’ll spend the next few months floundering, trying to regain footing.