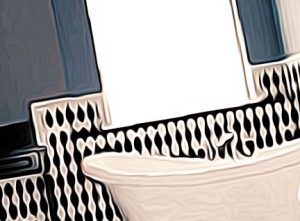 Melissa slowly twirled the bathwater with her finger, watching the bubbles swirl around. She knew that the water was getting cold and she had to get out soon, but she wasn’t ready. She could still feel the day’s stress clinging to her skin like a needy child.

‘Muuuuum!’ came a cry from downstairs. Speak of the devil…

She slipped deeper under the water, until it came up to her nose.

‘I think she went out,’ came another voice, her teenage daughter (and newly-favourite child). Melissa grinned. That ought to buy her another few minutes at least. She let her eyes slowly drift closed.

The one who was getting coal for Christmas.

A rush of movement outside the bathroom. A flurry of sharp knocks. ‘Mum? Are you in there?’

Why couldn’t they just leave her alone? Let her stay here until she was old and grey, and needed one of those bathtub modifications for seniors to get out?

Had she locked the door? Melissa suddenly couldn’t remember if she’d locked it. She unconsciously sank further under the water. What if they burst in? But if she told them not to come in, they’d know where she was — and they’d need things.

One of them twisted the handle and her heart skipped a beat. It jiggled, but didn’t open — she had locked it.

She put a hand to her mouth and slid underwater again. She could live here pretty comfortably, she thought. She would be happy if this was her life, even without the bath tub conversions. Sydney had been nice, but the bathroom at least had less traffic.

‘I guess she’s out,’ she heard the third child say. As the other two mumbled their agreement, shadows moving away from the door, she almost giggled, punching the air. Nothing could ruin this victory.

Melissa sighed and pulled out the plug.