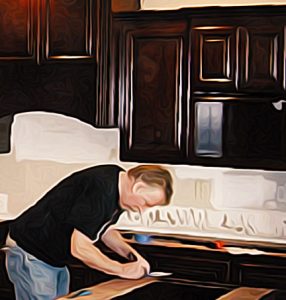 Yesterday my brother and I were in our kitchen, hunched over the stove. We wanted to surprise our parents with their favourite meal since they work so hard, and we figured they deserved a treat every now and then. As we were stirring the sauce in the pan, we heard a faint rumbling sound from behind us. We turned, trying to see where it was coming from but couldn’t find the source. It grew louder, and louder, until it was so thunderous we couldn’t hear each other over the noise. Suddenly, we realised – it was our fridge! Seconds later, the fridge door flew open and started spewing out food. Eggs flew across the room with so much force that it was almost like a hand was throwing everything. Apples smashed through windows. A whole roast chicken crashed through our flimsy benchtop. When it finally stopped, all I could think about was how we would need to get a kitchen doors and drawers replacement. That was when the ceiling caved in. Uhhh… on second thought, it looks like we’ll need more than that.

My parents had heard the racket and sprinted in to see what was going on. Catching sight of the mess, my father’s face fell. My mother started crying when she saw us covered in icing sugar, so we each gave her a thumbs up and weak smiles to confirm we were okay.

After everybody had processed the events, a glint appeared in my mother’s eye. Grinning like a maniac, she said at least now we had an excuse to start that kitchen renovation we’d been talking about for ages. She immediately hurried off to find the best kitchen design specialist in the Melbourne CBD, muttering under her breath about luxury benchtops and ornate cabinetry. I sighed and washed my hands in the sink. I think I should probably have a shower as well. Luckily we had CCTV to prove my brother and I hadn’t done anything to cause the mess. Otherwise, I’m sure we’d be grounded for years.